All our latex balloons are made from natural latex, which is biodegradable.
Latex is thus a renewable resource.

We have a wide range with different colors and textures and offer a variety of surfaces and shades;
Standard, Metallic, Chrome, Droplets, Macaron. The colors of our wide range are created from the Pantone Matching System (PMS), which means that each color has its own unique color code.

To be at the forefront of trends, ideas and designs, we regularly update our range of balloons. 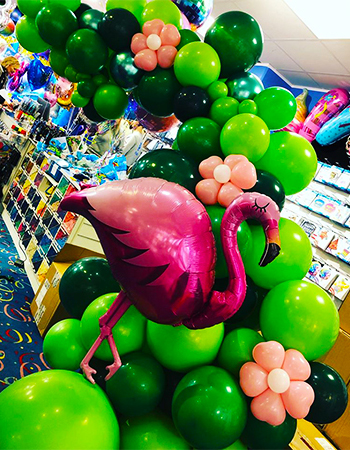 All of our balloons can be filled with both helium and air, so if you’re looking for helium balloons, you’ve come to the right place!

All our latex balloons are made from natural latex, also known as caoutchouc. Latex is a sticky, milky liquid harvested from the rubber tree. When harvesting, an incision is made in the tree’s bark and the liquid is collected in pots. This process is called “bottling”. The latex is then refined into rubber and ready for processing. All our latex balloons are biodegradable and manufactured without using any fillers, extensions, plasticizers or any cost saving agents. There are trillions of rubber trees that offset a large amount of CO2, helping to reduce global warming. When the tree no longer produces any latex after many years, the tree is used for timber. When old trees are cut down, new ones are planted.

We sell high-tech balloons, as our balloons are produced through constant research and development of not only the chemical composition of the latex, but also the entire manufacturing process.

The suppliers Partyland uses to purchase latex balloons use balloon factories that follow all global and ethical safety regulations. We always strive for the highest quality standard and therefore all our latex balloons live up to EN71 (toy safety) and EN71-12 (nitrosamines and nitrosatable amines). At the balloon factories, thousands of tests are carried out annually to ensure compliance with these regulations, in addition, the facilities meet all global ethical and safety standards (BSCI and SEDEX).

The balloons have excellent helium and air retention due to a high-tech and sophisticated molecular cross-linking that creates a high-quality barrier. The barrier keeps the air and/or helium in the balloon longer, making for more durable decorations.

As a company, we place great value on sustainability. We want to protect the environment from unnecessary stress. That’s why we ask our customers not to release latex balloons freely, so they rise to the sky. A latex balloon in nature decays much like an oak leaf. We recommend using balloon weights that ensure they stay on the ground.

Foil balloons are made of micro foil and therefore not biodegradable. Most of our foil balloons are manufactured in the USA and the suppliers we work with work with sustainability throughout the manufacturing process.
The microfoil used in our balloons is thin and thus the material availability is reduced by 20%. The solvents, inks and metals used in production are recycled in the factories. Excess heat from production is also reused.

Most of our foil balloons have a self-sealing neck that makes handling easy. These balloons are not sensitive to oxidation and are a sustainable option if the customer will use their balloons for several days. Foil balloons fly for about 2-4 weeks depending on size, but slowly release gas through the “neck”. 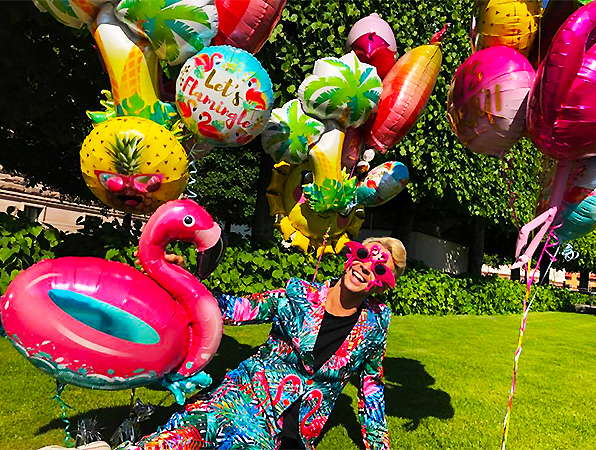 Foil balloons are more sensitive to cold and heat. Foil conducts heat and cold and therefore reacts more clearly with the helium. If the customer wants balloons outdoors in the winter, latex balloons are preferable. Foil balloons are mainly used for bouquets, top balloons, “centerpieces” but also as extra decoration on special decorations. The foil balloons are available in a wide variety of different shapes and colors, ranging from square, heart-shaped and star-shaped, to balloons that have a special shape, so-called Supershapes. Letter balloons and number balloons are examples of supershapes.

To make the customer’s balloon more personal, we offer handwritten glitter text on the foil balloon.
Some of our stores also print foil balloons, so companies can have their logo printed.

Helium (He) is the second most abundant and second lightest substance in the universe. Helium is invisible, has no smell or taste, is not toxic or chemically active, is not explosive and is the least active of all substances.
Unlike other substances, helium exists only in gaseous form, except under extreme conditions.

Helium shrinks in cold and expands in heat. Therefore, do not leave a foil balloon in a hot car in the summer,
although very high temperatures are required before a balloon expands and breaks.

Helium is not dangerous to inhale, but you can pass out if you use it too intensively.
However, it is dangerous to put your mouth against the mouthpiece of a tube, as the lungs burst from the pressure.

Helium has a lot of special properties, and you should keep that in mind when handling helium balloons.
One of these is the lifting power of helium. Although helium is lighter than air, one must have enough helium
in a balloon to also lift the material the balloon is made of. This is why helium does not lift the smallest balloons – the amount of helium that can be held is simply too small to be able to carry the material.

Another of helium’s properties is its ability to travel through matter.
Helium can get out of a latex balloon three times as fast as air, and it is therefore a helium balloon
in latex only lasts 6-12 hours before it starts to sink to the ground if it doesn’t
glued with Hi Float (an adhesive that seals the balloon from the inside).

This website uses cookies to improve your experience while you navigate through the website. Out of these cookies, the cookies that are categorized as necessary are stored on your browser as they are essential for the working of basic functionalities of the website. We also use third-party cookies that help us analyze and understand how you use this website. These cookies will be stored in your browser only with your consent. You also have the option to opt-out of these cookies. But opting out of some of these cookies may have an effect on your browsing experience.
Necessary Always Enabled
Necessary cookies are absolutely essential for the website to function properly. This category only includes cookies that ensures basic functionalities and security features of the website. These cookies do not store any personal information.
Non-necessary
Any cookies that may not be particularly necessary for the website to function and is used specifically to collect user personal data via analytics, ads, other embedded contents are termed as non-necessary cookies. It is mandatory to procure user consent prior to running these cookies on your website.
SAVE & ACCEPT